For the week from Monday 30 March to Sunday 5 April, peak download throughput (the measure of data flowing through the nbn™ access network) during daytime business hours, increased by 24 per cent to 9.6 terabits per second (Tbps) compared to the last week of February (which nbn measures as its normal pre-COVID-19 baseline).

“As more Australians work and study from home, we are starting to see network demand settle into a new range where network usage remains at higher levels throughout the day, compared to what we were seeing before self-isolation and social distancing measures were implemented,” said Brad Whitcomb, Chief Customer Officer – Residential at NBN Co.

Even though data demand during the early evening and busy evening hours continues to be significantly higher than the pre-COVID-19 baseline, it is only peak throughput during the daytime business hours that has grown since last week. Peak throughput recorded during business hours increased 6 per cent from the 9Tbps throughput peak that was recorded in the same time period for the week beginning 23 March. 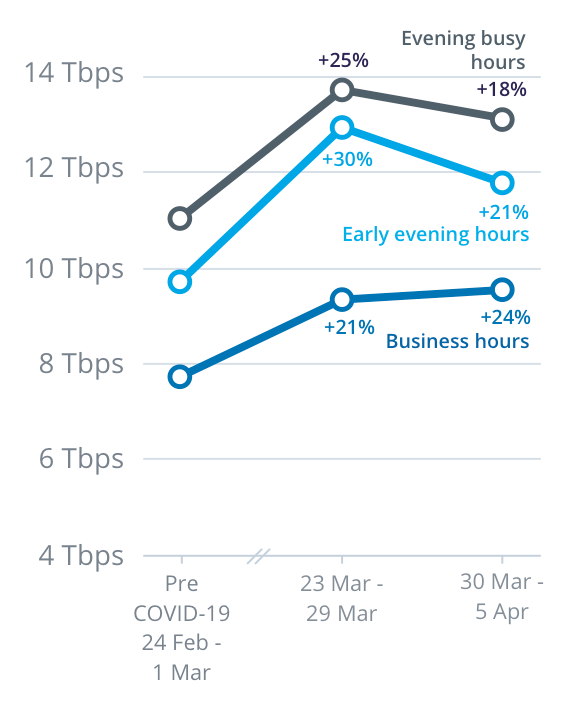 Since social distancing measures were implemented, traffic on the nbn main wholesale service during business hours continues to track at more than 70 per cent (as shown in the graph below at 11am) higher than the pre-COVID-19 baseline. 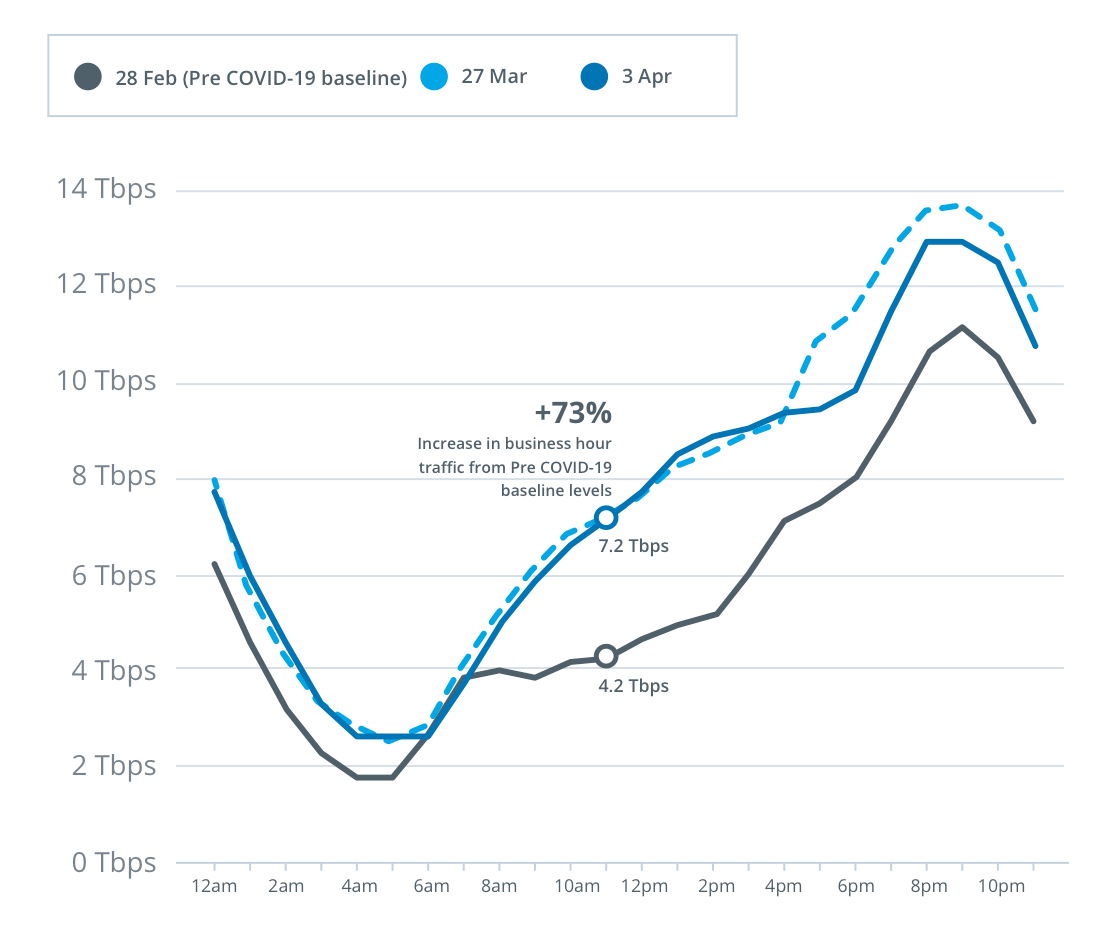 The new figures are revealed in the latest release of Australian Broadband Data Demand, a weekly report from nbn that shows the highest throughput recorded in a week during each of the following three periods: the daytime business hours, early evening hours and busy evening hours.

Compared to that pre COVID-19 period, peak download throughput on the main wholesale service in the evening busy hours increased by 18 per cent to 13.1 (Tbps) for the week beginning 30 March. This was down from the peak data throughput of 13.8Tbps for the week beginning 23 March. That peak was recorded on the night of Friday, 27 March and coincided with an update to the popular video game Call of Duty.

The peak download throughput on the main wholesale service recorded in the early evening hours for the week beginning 30 March increased 21 per cent to 11.8Tbps, compared to the pre-COVID-19 baseline. This was also down from the previous week’s 12.8Tbps peak throughput measure that was recorded in the same time period.

The increases in download peaks since the last week of February, comes as NBN Co continues to see strong demand for new connections. Over the past two weeks, more than 40,000 activation orders have been placed NBN Co as more Australians shift their work and educational needs to their home broadband services.

“We have seen a significant increase in higher speed orders as more Australians look to support the internet needs of their families and households who rely on fast, reliable broadband to now study, work and play,” Mr Whitcomb said.

“It’s important to remember that the acquisition of capacity by internet providers is crucially important for nbn residential and business customers to maintain access to reliable, high-speed broadband. To assist, nbn announced on 18 March 2020 that it would waive charges for additional capacity of up to 40 per cent to internet providers for at least three months".

For tips on how to make the most of your nbn connection and to learn more on what NBN Co is doing to support Australia through COVID-19, please visit: www.nbnco.com.au/campaigns/covid-19

NBN Co chief executive Stephen Rue today provided a fresh update on how nbn and the broader telecommunications industry continues to support the nation during the COVID-19 crisis as more Australians rely on broadband services to work, study and connect with families and friends from home.

Speaking via video conference to the online audience of the annual CommsDay summit today, Mr Rue confirmed the nbn continued to perform strongly as Australians continue to self-isolate and increasingly rely on broadband services delivered over its network.

“Many countries around the world will be facing this crisis without the secure, resilient and fast broadband access network that nbn brings to homes, businesses and schools.”

Compared to the last week of February (nbn’s Pre-COVID-19 benchmark), before social distancing measures were in effect, data demand on the nbn has significantly grown.

Mr Rue said that while these increases are significant compared to the Pre-COVID-19 benchmark, they remain well within the capacity headroom built into the nbn.

Mr Rue also confirmed that as nbn continues to experience increases in usage across the network - congestion, and outages have remained at low levels with no material increase compared to previous months.

“For NBN Co, our priority is to ensure that all Australians, no matter where they live or their circumstances, can connect to a high-speed, secure broadband network and continue to have access to the employment, education and entertainment opportunities that this technology enables,” he said.

“I can assure you we are using all of our resources and drawing on local and overseas expertise, to help keep the nation connected, productive, educated and informed through this crisis, as well as being able to stream video on demand.”

Mr Rue also underlined the importance of NBN Co and the telecommunications industry working closely together to support Australians through this crisis.

“Now, more than ever, it is absolutely critical we work together as an industry to help the nation stay connected,” he said.

“By working together, I have no doubt that our industry will rise to this challenge and help the nation when it needs us most.”

The difference between each type of connection simply comes down to how we utilise existing network technology in connecting the nearest available fibre node to a specific premises.

Many small and medium businesses (SMB) on the nbn™ access network are embracing the cloud to save time and grow, but many think they don’t have the right broadband plan to take full advantage of future opportunities, according to research released today by NBN Co and Australian emerging technology analyst firm Telsyte.

The Telsyte Digital Workplace Study 2020 indicates that businesses on the nbn™ broadband access network see the biggest benefits to them are broadband availability where none were available previously, improved connectivity for branches, and helping businesses become more competitive.

The survey also revealed the growing penetration of cloud technologies amongst small and medium businesses, while highlighting many of them don’t think they have the right solution to fully meet their requirements in the future.

Two thirds (64 percent) of SMBs are now using cloud applications such as virtualised servers, storage, databases, networking and software as a service, but more than half (54 percent) don’t think their current broadband plan is adequate to support both their current and future cloud needs. Read more

NBN Co today released a Connecting Older Australians Expression of Interest to more than 50 Retail Service Providers (RSPs) and Consumer Groups with the aim of co-developing comprehensive and innovative solutions that encourage more seniors to get online.

NBN Co Chief Customer Officer, Residential, Brad Whitcomb, said: “Following feedback from industry stakeholders and nbn’s own analysis of customer segments that make up the unconnected, nbn is prioritising the over 65-year-old segment of the community, as part of the first phase of a broader strategy to lift the digital capability in underserved segments of Australia.

“Our research found the over 65-year-old segment is the fastest-growing demographic in the country that is unconnected.  “ABS data shows 15.9% of Australians are aged 65 and over, while there are 2.5 million older Australians who receive an Age Pension for income support. Research from the 2019 Australian Digital Inclusion Index shows that people aged 65+ are Australia’s least digitally included age group. “These statistics are concerning for us and the reason we have decided to prioritise the over 65s segment.” Read more